The CAN (Controller Area Network)Â is a serial communication protocol, and efficiently supports distributed real-time control with a very high level of security. It is an especially suit for networking "intelligent" devices as well as sensors and actuators within a system or sub-system. In CAN networks, there is no addressing of subscribers or stations in the conventional sense, but instead prioritized messages are transmitted. As standalone CAN controller, PISO-CAN400/CAN200 can represents an economic solution of an active CAN board. It has two or four independent CAN bus communication ports with 5-pin screw terminal connector or 9-pin D-sub connector, and has the ability to cover a wide range of CAN applications. Besides, PISO-CAN400/CAN200 uses the new CAN controller Phillips SJA1000T and transceiver 82C250/251, which provide bus arbitration, error detection with auto correction and re-transmission function. It can be installed in a 5V PCI slot and supported truly âPlug & playâ.

The PM-213x-CAN series power meter provides the CAN bus interface for users to easily gather the real-time power consumption information in their CAN applications. The PM-213x-CAN provides the Auto-Response mode which responses messages at regular intervals automatically. It makes the communication more efficient when collecting a lot of remote power information. The polling mode offers the precise information of every step required by the monitors. In addition, the PM-213x-CAN also owns the arbitration mechanism which can avoid data collision and error detection.

Features of CAN bus power meter:

Note: We have verified to drive 100 CAN nodes at the same time via one CAN port of PISO-CAN400 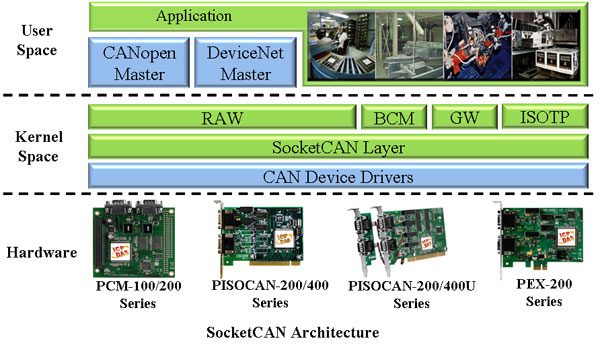 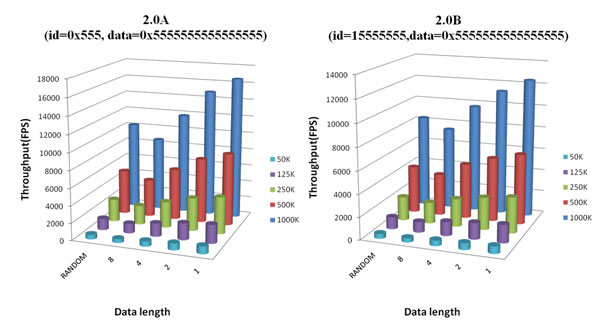 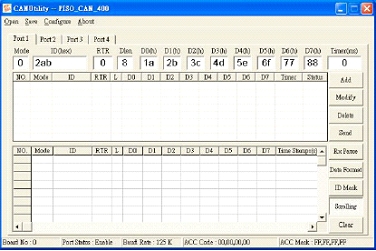 There are various communication interfaces among the CAN devices like PCI CAN board, Ethernet series and RS-232 series CAN module. According to different purpose of usersâ projects, the users maybe need to choice different CAN products. Because of this situation, the programmer should develop different communication program to handle different CAN device. For example, the user should develop âSocket Clientâ to communicate with I-7540. When using I-7530, the users need âUARTâ technique to communicate with it. Nowadays, ICP DAS develop the Virtual CAN technique. The Virtual CAN driver is the excellent tool for users. It transforms whole CAN devices into Virtual CAN port. And then it generates Virtual CAN port like âVxCAN 1â or âVxCAN 2â. The users could send and receive CAN message by appointing the Virtual CAN port number. The users don't need to care about what kind of CAN device which is used. 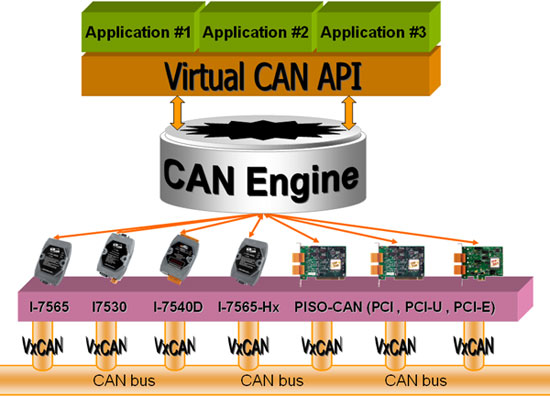 DeviceNet is a low level network that provides connections between simple industrial devices (sensors, actuators) and higher level devices (controllers). It allows direct peer to peer data exchange between nodes in an organized and, if necessary, deterministic manner. We provides DeviceNet library for users to develop the specific DeviceNet application by PISO-CAN200/400. In addition, we also provide the DeviceNet diagnosis application tool to monitor and diagnose the DeviceNet message through CAN network. It provides the DeviceNet communication protocol interface to control and analysis the DeviceNet slaves.

In order to implement DeviceNet communication by NI LabVIEW software, ICPDAS provides a set of DeviceNet component for LabVIEW- âICPDAS-DNETâ. We also have the configuration utility to configure the ICPDASâs DeviceNet hardware in your PC. The users not only operate easily and develop application rapidly, but also reduce the complexity of applications. The users can communicate with the remote DeviceNet devices in a few simple steps and need not to know about the detail of the DeviceNet protocol. It is a very useful tool to develop the DeviceNet application in NI LabVIEW environment by using ICPDAS-DNET. After finishing install the tool, we offer many basic and advance demo programs for users to reduce the development time. If you are new engineer to develop DeviceNet application, you can refer to the demo programs first. It is the best tool to develop various distributed systems and other industrial application software on DeviceNet network.