One Standalone Intelligent CAN Communication Board with terminal connector

The CAN (Controller Area Network) is a serial communication protocol and efficiently supports distributed real-time control with a very high level of security. It is suited for networking "intelligent" devices as well as sensors and actuators within a system or sub-system. In CAN networks, there is no addressing of subscribers or stations in the conventional sense; instead prioritized messages are transmitted.

ICP DAS provides an open architecture platform for CAN bus-PISO CM100. The PISO-CM100 represents a very powerful and economic solution of an active CAN board with one CAN channels, covering a wide range of CAN applications. The 16-bit on-board microcontroller allows, among many other features, the filtering, preprocessing, and storage (with timestamp) of CAN messages as well as the real-time transmission of CAN messages. PISO-CM100 also uses the new Phillips SJA1000T and Transceiver 82C250/251, which provide bus arbitration and error detection with auto correction and a re-transmission function. With the powerful microcontroller, this card can be made for one CAN controller without losing data, even in systems with a high bus load. It is equipped with integrated intelligence functions, so PIO-CM100 makes it possible to preprocess CAN data streams; thus relieving the PC of a considerable burden. As a result, real-time requirements on PC applications are drastically reduced. It can be installed in a slot of 5V 32-bits PCI bus and supports true “Plug & play” technology. 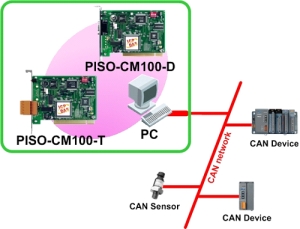 One Standalone Intelligent CAN Communication Board with terminal connector