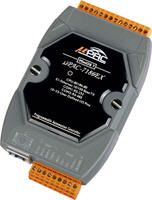 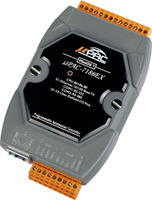 It's powered by a 80186-80 processor with 512K bytes of static RAM, and 512K bytes of Flash memory. It has one serial RS-232 port and one RS-485 port. Ethernet support is provided by a NE-2000 compatible controller with 16K bytes of on-chip buffer memory and 10Base-T media interface. The I-7186EX also provides 14 user defined I/O lines. A cost-effective I/O expansion board with A/D, D/A, relay drivers and protected inputs is available. The I-7186EX also supports battery back-up SRAM disk board and Flash-ROM board, providing non-volatile mass storage from 2 megabytes to 64 megabytes. The 10BASE-T port is equipped with a RJ-45 connector. The 10BASE-T interface supports distances up to 100-meters (cable length) between I-7186EX and the network hub.

Ethernet protocol is the de-facto standard for local area networks. Via Internet, connectivity is occurring everywhere; from home appliances to vending machines to testing equipment to UPS. Many embedded designers face dilemma of adding Ethernet interfaces to their products, either for use with local networks or for connecting to the Internet. Solutions to this problem include hardware and software. Connecting via Ethernet requires TCP/IP software protocol. The installed base of Ethernet networks is huge and growing. Most office building, factories, and new homes have installed Ethernet networks. With Ethernet, the network is always available. Using Ethernet for networks in industrial areas is appealing because the cabling is already installed.