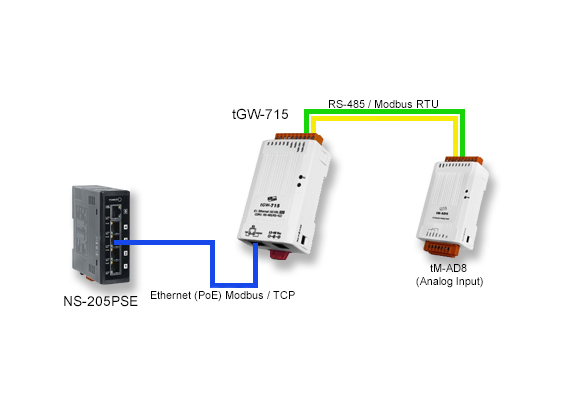 The tGW-715 tiny Modbus TCP to Modbus RTU gateway supports DHCP client function, which minimizes configuration errors caused by manual IP address configuration, such as assigning an IP address to more than one computer or device at the same time. The tiny Modbus TCP to Modbus RTU gateway also features a UDP responder that transmits its IP address information in response to a UDP search from the eSearch utility, which provides a more efficient way for local management.

The tGW-715 tiny Modbus TCP to Modbus RTU gateway has a powerful 32-bit microcontroller (MCU) for efficient handling of network traffic. It also has a built-in web server that provides an easy web interface that allows users to modify the configuration of the module on a web page, including the DHCP/Static IP, the gateway/mask settings and the serial port settings. No programming skills are needed and configuration is easy.

The tGW-715 tiny Modbus TCP to Modbus RTU gateway is equipped with a dual watchdog - one CPU watchdog for hardware functions and a host watchdog for software functions. The dual watchdog is an important feature that ensures the reliability of the Modbus gateway, even under harsh environments. The CPU watchdog automatically resets the CPU if the built-in firmware is not operating properly, while the host watchdog automatically resets the CPU if there is no communication between the module and the host PC or PLC for a predefined period of time (system timeout).

The tiny Modbus TCP to Modbus RTU gateway is also equipped with a male DB-9 or a removable terminal block connector to allow easy wiring. Thanks to its tiny size, the tGW-715 can save your space and allows easy installation anywhere, even directly embedded in a machine. It also supports automatic RS-485 direction control when sending and receiving data, which improves the stability of the RS-485 communication.